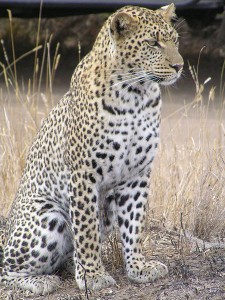 The Leopard is one of the Big 5. Image courtesy of Jan Erkamp

The “Big Five” is a phrase that initially referred to the five African animals that game hunters regarded as the hardest to hunt on foot, and the most dangerous. Shooting and killing one of the Big Five was, therefore, a testament to the skill of the hunter, and very much more difficult than finding a great Nissan Micra for sale. Nowadays, and whereas the phrase refers to the same animals, the Big Five have become a tool for marketing observer-orientated Safaris (that is, Safaris that geared towards non-invasive and voyeuristic observation of animals within their natural environmental, and NOT towards hunting).

The animals that go to make up the big five include the lion, the Cape buffalo, the leopard, the black rhinoceros, and the African elephant. The iconic cultural role that the above animals play is important in popularising contemporary Safaris, ecotourism and, in a general sense, the “African Wild”. Although these popular understandings are unsophisticated, they do go a long way in attracting foreign visitors to South Africa, and, in turn, this tourism is used to fund wildlife protection projects.

South Africa, however, is not the only country to host the big five: in fact, the five animals that consist of the group can be found in Namibia, South Africa, Kenya, Tanzania, Zimbabwe, Botswana and the Democratic Republic of Congo. If you are considering embarking on a safari, check out the great deals on useful gadgets at www.uPrice.co.za.

The African elephant is one of the largest land animals on the planet, has an almost hairless and very thick skin, ivory tusks (which are actually upper incisors), large leaf-shaped ears and a highly mobile trunk. An elephant’s large ears are filled with blood vessels and fanning them is the primary mechanism through which an elephant can regulate its body temperature. The trunk of the elephant is lined with nerves which enhance the animal’s sense of smell. The trunk is also used to suck water into which is then emptied into the elephant’s mouth when drinking. One last function of the trunk is to grab branches and break them off of trees when foraging for food. Despite their enormous size, elephants are difficult to spot in the bush due to their grey colour and their skin is resistant to small calibre rifles.

The black rhinoceros is distinguished from the white rhino not by the colour of its skin but, primarily, by the width of its mouth. The white rhino has a wide, flatly shaped mouth whereas the black rhino has a much narrower, slightly pointed mouth. Both types of rhino are herbivores and are targeted by poachers as the ivory in their horns (either one or two horns are found on the nasal bridge) is highly valued in, especially, far eastern markets. Traditionally, the black rhino is more prized as a hunter’s trophy than the white rhino, which today means that the black rhino is Critically Endangered. With the rise in poaching over the 2010-2012 period, fears of species extinction are being realised.

The Cape buffalo, also known as the African buffalo, is a horned “bovid” that holds the dubious title of being the member of the big 5 that has claimed the most hunter lives. The buffalo is a large animal that, with the addition of its horns, can maul its predators and is often able to withstand attacks by other wildlife. Wounded buffalo have been reported to ambush hunters and thereby launch a counter-attack on their pursuers.

The lion is probably Africa’s most iconic animal, especially with it’s majestic mane that makes it look like a large cat with fierce hair extensions. Indeed, the lion is often associated with pride. Amongst the big 5, the lion is usually regarded as the most sought after trophy by hunters and the most sought after sighting by eco-tourists. Male lions are distinguished not only by their size (they are larger than the female of the species), but by the thick mane found around their necks. This mane protects males when they battle other males for dominance and mating rights. The spotting of lions is made difficult by their natural colouring, which mimics the dry yellow-brown colour of grasslands. In order to ensure lion sightings, reserves will sometimes borrow a technique developed by hunters known as baiting: essentially, lions are attracted to an area by the lure of fresh meat and tourists/hunters are hidden behind a natural or constructed “blind”.

Leopards, like lions, are members of the feline family and are amongst its largest members; as far as the big cats go, though, leopards are the smallest and very rarely exceed 100kg. The predatory cats are identified by their tawny fur being punctuated by black, rosette-like spots. Some leopards are, however, completely black. Spotting leopards is a difficult task owing primarily to their secretive nature and the fact that they are largely nocturnal. Although they are well camouflaged by the long grass found on savannah plains, leopards are also notorious for lounging on the branches of trees.

Lions and African elephants are included on the Endangered Species list, while leopards and white rhinos are classified as being Vulnerable (in danger of being threatened). The most critical of the big 5 in terms of their conservation status is the black rhino: it is classified as critically endangered, and if poaching is not halted, the species might soon be declared extinct. Cape buffalo numbers are relatively healthy, and, of the big 5, enjoy the least worrisome conservation status.